Peter Towers
by StephenRBeet over a year ago
More...
Monthly Message:   Here we feature short monthly message written by the vicar and taken from the Parish Magazine.  We also report on the club news for that month.

For the first time since I became a priest I am having to write this letter from the inside of a hospital.  It seems strange to experience life from the inside when I have been used to visiting patients in all the local hospitals.  I must say that I feel very frustrated since I feel so well in myself, at any rate I hope to be home again in a matter od days and take up the reins once again.  I should like to thank all those who have sent letters and made kind enquiries.

By the time this magazine is printed, the table tennis team will have completed its fixtures in the league.  The team has done  extremely well during its first year in this standard of table tennis, and at the same time thay are the youngest side.  We hope we may end up equal winners, but if not, we shall be near the top of the table.

In the Snooker Championships we have reached the final and in the table tennis, the matches are nearing completion.

The Notts and Derbys Championships will be held at Nottingham University Sports Centre in March.  We shall be entering teams in the Chess, Table Tennis and Basketball events.

Owing to the increase in the cost of fuel, lighting and running expenses, we have been obliged to raise the nightly subscription to 10p.

My dar Parishioners,
The doctors have made it clear to me that I shall never be able to
fulfil my duries as Vicar, as I have tried to do in the past.  After a
great deal of thought I have decided, for the sake of the parish, to
resign as Vicar on 15th May.  When a Vivar retires, unless he has
money of his own, he has nowhere to live.  I explained the position to
the Church of England Pnsion Board, as well as to the Bishop, and they
have kindly bought a bungalow at 7 Orchard Close, Ockbrook which they
will rent to me.
When Mrs Ffinch and I have 'settled in' we shall look forwad to
enjoying you as friends, if no longer as parishioners.  I have asked
Captain Drury Lowe, who is Patron of the Living, and the Bishop, to
appoint my successor as soon as possible. This thy have promised to
do.
Although I hope to return toSpondon to take up my duies again in the
near future (and when the weather is warmer), my activities will be
limited.  t will be good to see everyone again.
Your sincere friend and Vicar
T.E.M. Barber
Boy's Club
During the Vicar's absence, we have tried to keep the club running
as near as possible to the normal activities which has not been as
easy as one would think, for it is only when the Vicar's guiding
figure is not present that we realise just how much he s missed.  We
are very pleased to hear that his recovery is progressing well, and
send our very best wishes  and look forward to the day when he is
amongst us again.  We know that during his illness, we have been
constantly in his thoughts, and he has kept a keen interest in the
activities; his thanks have been passed to all members for their get
well cards and letters.
The in-house competitions have now reached the semi-finals in the
juniors,a nd finl stage in the senor evets, and we are planning a
finals night on one of the Club nights.  So all parents are welcome.
We have entered a strong senior team and a Junior team in the Notts.
and Derby Boys' Club Association Cross Country Race held at Wollaton
Park, Saturday, 8th March, from which the first Derbyshire club home
will represent Derbyshire in the regional finals at Stoke-on-Trent.
We would like to thank Mr. Blavins for his time and help given to
the Club during the Vicar's absence.

TWENTY-FIVES YEARS AS VICAR OF  THIS PARISH 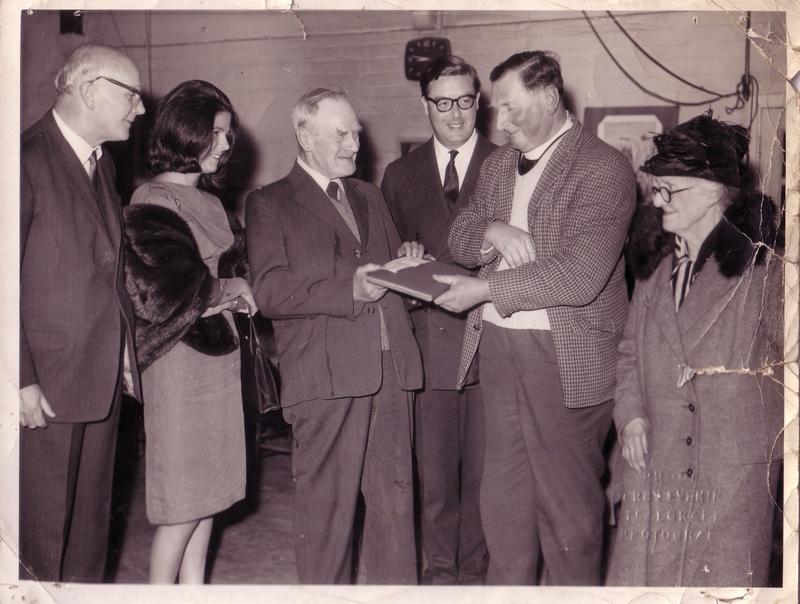 Presentation to mark the 25th Anniversary of the Induction of the Reverend T.E.M. Barber as Vicar of Spondon

We are holding a Jumble Sale in aid of Club Funds in the Club Room on Thursday, January 30th at 7-15.

The Annual Competitions are in full progress.  We are still waiting for the new equipment which the Youth Education Committee has promised us, but we still need roughly £50 to re-equip the Club.  We shall be glad to receive any contributions to help meet this amount of money.

The first team beat Prestige in the League Football Cup.  We play Aiton's in the next round.  We hope, once again, we may reach the Final of the Cup.  The Second team have won their second League game, beating Melbourne Dynamoes.  We hope that they will continue to win matches.

We have quite a full Cricket Fixture List for the Summer programme for both Senior and Junior teams.

We have entered teams in the Five-a-side Trent Valley Competitions at Football and also a team in the Chess Competitions.

A Happy New Year to you all. As an old year comes to an end and a new year commences, most of us look back on the past before looking forward to the future.  1974: a year of rapid change. I suppose few of us ever dreamt that the cost of living would have increased so fast and so high. The life we enjoyed a short time ago has probably disappeared for ever, so much so that we have got to readjust our thoughts and lives to a period of austerity. Perhaps it will do us no harm if we are forced to lower our standard of living. We have enjoyed many benefits in life - plenty of food, warmth, motor cars, moderately cheap petrol and heating, no shortage of goods in the shops, holidays - often spend abroad, when millions in the world have had little comfort or food. There has been a very common attitude to the wants of others, it has been just this: 'I'm alright Jack'.  I believe it true to say that the two greatest evils at the present time are selfishness and greed.  As we enter 1975 let us all try to fight against these two evils and replace them with their opposites - unselfishness, consideration for other people and a contentment wit all the benefits we share.

It is when times are not so good that people begin to think and realise that we need God and His help.   If only we could learn to place our lives and problems in God's hand we would find ourselves in a very different world.

Your sincere friend and Vicar,

May we, at the beginning of a new year, thank all who have helped the Club during the past year: the mothers and friends who have helped with the fundraising; the men, who turn out on a Saturday afternoon to help with the transport to football matches; without this sort f help it would be very difficult to keep the Club going.

The next Jumble Sale will be in February, so if anyone has anything to throw out plese let us have it, or let one of the boys know; we can then arrange to pick it up - vrockery, furniture, etc.

Football is rather a sore point in the Club at the moment, neither team doing very well, possibly because Derby are having a good season!

As we expected the Derby Borough Table Tennis League is a much harder one than the County League, but even so, the first team is doing quite well